← more from
Wic Recordings
Get fresh music recommendations delivered to your inbox every Friday. 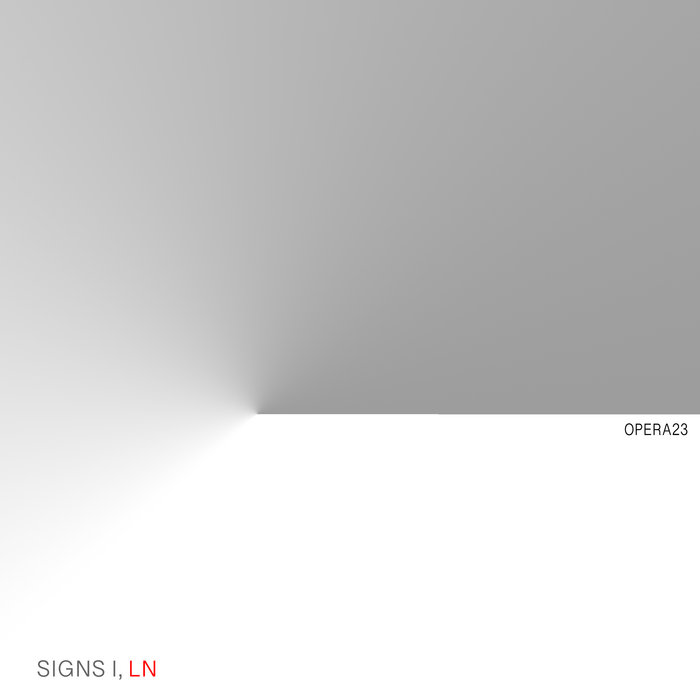 The path of Opera23 continues, presenting the second of the four ep, which form the series entitled "Signs". It is a journey through the various compositional stages that the artist faces and shares with the listeners. A careful analysis between gesture and action, a relationship that in a totally digital age seems to have dissolved. After proposing the first episode, square, in this second ep, Opera23 analyzes the initial manifestation of the creative process: the line. Line is the primordial element of art, where reason seems to succumb to the immediacy of the gesture. The line represents the exasperation of basic concepts, the numerical justification of irrationality.

Listening to these pieces certainly cannot meet the help of repetition - a dominant feature in many compositions by the Italian composer-, the harmonic elements are limited, almost non-existent, there is no driving rhythm, no melodies. Listening, as well as the composition, follows a line in which the elements present develop an irregular path, in constant evolution.

With these premises Opera23 proposes 4 different pieces, linked by a character of research and sound investigation.
Neowise is a composition for double bass and electronics. The sound of the double bass was directly recorded and then treated with a ring modulator, an analog delay, filters and saturators.

Prologo per una stagione all’inferno is a piece for solo voice, recorded in Bologna in 2018. The voice is by the virtuoso Luca Fattori, while the text is taken from Arthur Rimbaud's “Saison en enfer". It is a piece in which the voice is investigated, elaborated and re-proposed to create a choral and dramatic reading of a page of high literature.

Engram was initially born as a soundtrack for a short film by the Japanese visionary director Toshio Matsumoto "Engram: Kioku konseki", later it was converted into an independent piece without losing the strong experimental and research character due to the initial relationship with the sequences of the Japanese director.

Eoseco is a composition born from the collaboration with the Italian painter and sculptor Giorgio Bevignani. This is a piece composed on the occasion of the vernissage of Artefiera 2019 in which Bevignani exhibited a preview of his work which, in fact, was entitled, Eoseco. This composition was initially born as an electroacoustic piece for an 8 speaker system, then has undergone several variations over time until this final version, in which was added a line of arpeggios created with a modular synthesizer.

The songs were recorded between Bologna and Barcelona, the master was made by Giuliano "Gius" Cobelli.

opera23 aka Vincenzo Germano. Producer, composer and multi-instrumentalist, based in Barcelona (ES). After classical studies he developed a profound interest in sound research and construction and its spatialization. His language blends the experience of repetition, reduction, through the use of technology. ... more

Bandcamp Daily  your guide to the world of Bandcamp